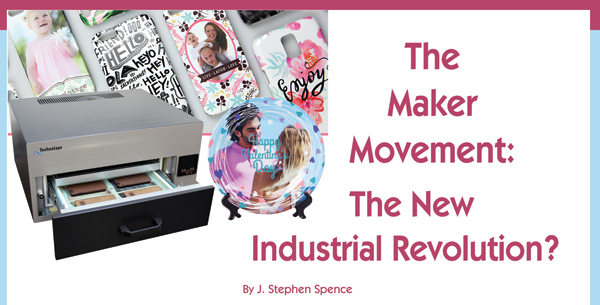 One of my favorite sayings is, “You can’t know what you don’t know.” This article is about something I didn’t know about a few months ago. I suspect that most EJ readers don’t know about it either but perhaps you should, for this could be the way of the future, and it could have a profound effect, negatively or positively, on your business. It’s called the “maker movement.”

Chris Anderson, editor-in-chief for Wired magazine and the curator for TED Talks, has written a couple of books that make a good introduction to the maker movement. They are The Long Tail (2006) and Makers: The New Industrial Revolution (2012). These are two of the most basic books on this “new movement” (well, it isn’t really all that new and I don’t know what really constitutes a movement). Another book to consider is The Makers Manual: A Practical Guide to the New Industrial Revolution (2015) by Paolo Aliverti, Patrick Di Justo and Andrea Maietta. There are, of course, many others and most can be purchased from Amazon or elsewhere.

The “new revolution” these authors talk about can best be summed up this way: In years past, the way something went to market was an inventor would come up with an idea and, if possible, create a prototype of his invention. He would then apply for a U.S. patent, which is an expensive, time-consuming step. The cost and complexity of this step alone probably kept most good ideas from ever seeing the light of day. Next, the inventor had to find someone who would manufacture his device—another very expensive step. Then, he had to find a distributor who would market and sell the invention for which he would typically get a royalty that might amount to only a percent or two of the selling price.

There were many pitfalls in this process. First, the patent might be challenged which required more attorney costs, more time and more money. Once you committed to a manufacturer, they would often try to find shortcuts to making the product to reduce costs and increase profits. This often cheapened the product, made it less reliable, etc. As for the distributor, he might or might not market the product aggressively and thus restrict its success. In all of this, the inventor would have little, if any, control. In fact, the finished product might not even be recognizable to the inventor once it hit the store shelves.

Chris Anderson presents just such a case in his book, using his own grandfather as an example. His grandfather was the inventor of the pop-up sprinkler head that is used all over the world today. He struggled through all these steps and ended up with little more than a token payment compared to the millions of dollars spent on his invention.

Today’s “new industrial revolution,” as viewed by these writers and many others, can be quite different. In today’s world, the patent process is often eliminated and the concept or even the actual drawings are put on the Internet for anyone who wants them. Manufacturing can be farmed out but in the maker movement, this step is often taken on by the inventor—at least until the business is large enough to support hired staff. Likewise, the inventor also takes on the responsibility of marketing and distribution. This is made possible with open sites like Amazon, eBay and Etsy.

For some, this process is merely a hobby to make a few bucks and have some fun but for others, this is the culmination of a life-long dream—of working for themselves, of having their own business. It’s something we can all relate to.

So how do they do it? Gearing up to start a business, even a very small one, requires space, training and the purchase of whatever equipment is needed to make the product(s). It might require the assistance of engineers, marketing experts, web designers and who knows what else. It might require a lathe, various saws and other woodworking tools, and metal working tools like a punch, break or shear. It might require wide-format printers or 3D printers, CNC machines and more. Another really useful tool for making things is a laser cutting and engraving system. Ok, now that I’ve mentioned a laser as part of the maker movement are you starting to see a connection with your business?

The idea that creating things involves a huge investment in expensive equipment, software and other things puts a lot of would-be inventors and producers in a bad way since the manufacture of even a single simple product would never be feasible. That’s where the “maker spaces” come in. They are all over the world—literally thousands of them. If you don’t believe me, try a web search for “maker spaces” in your community.

These maker spaces offer ready access to all kinds of equipment the inventor can use to make his or her product(s) without having to buy anything. Some maker spaces offer every woodworking tool known to man while others might offer the same in metal working tools. Some European maker spaces even offer labs where people can work on medical cures and chemistry projects. Some maker spaces offer a variety of tools that might include both wood and metal. A maker space in Cincinnati, OH, for example, has both a complete wood shop and metal shop, 3D printers and a cutting/engraving laser. Anyone can use the equipment to make prototypes or finished products for a flat fee of $40-$75 per month. This is big business, too. The Cincinnati maker space has an annual income in the $14 million bracket.

Maker spaces go by many names, including FabLab, Hackerspaces, Science Lab, Idea Lab, Teen/Youth Centers, Drop-in Spaces, Innovation Labs, only to mention a few. Each “space” offers something different. I want someone to invent grass that only grows 2" tall and always stays green no matter what the weather is. And who knows? Someone might be working on it this very minute.

A growing place to find these maker spaces is in public libraries and both public and private schools and universities. These are places where children and young people can tinker and experiment with all kinds of technologies both during and after school. We’ll talk more about these in a future article. 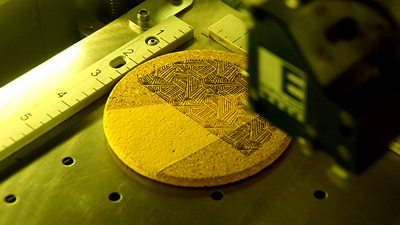 There is also typically a staff of full-time employees at these maker spaces to teach members how to use the various tools safely, help with design work and teach classes on how to do everything from market a product to running a laser engraver.

In my town, Huntington, WV, there is a facility called the Robert C. Byrd Institute (yes, that Robert C. Byrd). In it, they have a maker space one can join for $40 a month and have virtually unlimited access to 3D printers and other prototyping equipment. But the big stuff is downstairs on the main floor. There, you will find a 4' x 8' 4,000W CO2 laser, several lathes, 80-ton metal breaks, grinders, CNC machines and millions of dollars’ worth of other tools all available to any West Virginian who wants to experiment or start a business.

The fee for using the equipment varies. I pay $75 per hour to use the 4,000W laser. Of course, there are people to help you learn to operate the various machines and an engineer to help with design or computer input. There are three of these facilities scattered across the state. Although you probably won’t find many locations as handsomely equipped as this one, there is most likely some kind of maker space near you. Just do a search for “maker spaces” on the Internet. Local maker spaces will be happy to give you a tour of their facility and provide membership information.

Now comes the $64,000 question: What does all this mean to you? Why should you care about the makers movement? Why should I? Because this is a growing element of our competition for one. Check out all the really neat products being offered on www.etsy.com. These people have come up with some really ingenious, unique products and although they are unlikely to be a major threat to our businesses, it is certainly something we should know about. Etsy makers have focused a lot on wedding products and have created some really beautiful cake toppers and gift items.

In generations past, the production of products like these were limited because a “real” manufacturer required an order for thousands or tens-of-thousands of pieces, staggering tooling costs, shipping and inventory costs, etc. The first industrial revolution was based on the idea of mass production of the same or similar parts. Few could afford such investments and even if they could, chances are, sales would never present a return on their investment and even if it did, it might be years before that happened.

With the new revolution, little of that comes into play. With the maker spaces, there is no equipment to buy, no significant inventory to maintain, no financing costs and no huge minimums to contend with. In this approach, orders can be personalized because they are usually one-up orders. Small quantities are the order of the day. Raw materials can be purchased in small quantities as needed and employees are not hired until justified by the success of the product. Prototyping and modifications are relatively easy and inexpensive to produce so the product can be continually improved and updated.

Another reason why you should know about this movement: You might want to learn a new skill—not to necessarily make a living with but to enhance your existing business, or maybe just for fun.

If you served in the military, you might be familiar with the wood shops they often had on base where a member of the military or their family could go and work with tools in a nice, clean, safe place. Some offered car repair tools while others offered woodworking; still others offered photography labs where you could process your own film and I’m sure still others offered other things. This might even be where the idea for maker spaces originated. The two have a lot of similarities.

Many of today’s new makers are young adults (millennials and generation Xers) who are very computer savvy, well-educated and highly creative. Quite a few have learned their skills as makers, then purchased their own equipment and became budding entrepreneurs in the Recognition and Personalization Industry.

So where has this maker movement been hiding? Observers say it started about five years ago but has grown exponentially since then. It has, in fact, become its own industry.

In my mind, the most significant statement made in Chris Anderson’s book is, “We are all designers so we might as well get good at it.” This hits home since our industry is almost entirely computer controlled and dependent on our ability to design things on a computer with CAD software, CorelDRAW, Adobe Illustrator and other graphic-oriented software.

Watch for more about this new industrial revolution in future issues.