Sandblasting, also known as sandcarving, is a popular method for etching designs on a variety of materials, including marble, wood, stone and, in particular, crystal and glass. When used to etch glass and crystal items, sandcarving produces an elegant, distinctive look that can range from light etching to deep, multi-depth carving.

One of the most important components in sandcarving is the stencil. A stencil or mask, as they are commonly called, contains the images that will be sandblasted. A stencil has open areas which expose the surface to the sprayed abrasive stream and allow the material to be eroded, and it has closed portions that protect the areas of the material that won’t be blasted.

An important alternative to photoresists (for those of you who own laser engravers) is to use your laser and a self-adhesive laserable film to create stencils. This technique eliminates the need for the film processing portion of sandcarving as the stencil can be created directly on the item to be blasted. Not only does this eliminate the need for a UV exposure unit and a washout area (and the costs associated with that equipment), but it can save a ton of time since you can usually produce a laser engraved stencil in 5 minutes or less compared to the 15 to 20 minutes needed for a photoresist stencil. With a laser engraved stencil, the product goes directly from laser to blaster.

There are two companies that offer laserable films for sandcarving. IKONICS Imaging, Duluth, MN, offers two films and Rayzist Photomask, Inc., Vista, CA, offers one. All three perform well. All films have a low tack adhesive, so they are easy to work with and easy to reposition as needed prior to lasering. They are also easy to remove after blasting. The various films can be easily identified by their color. These films have an unlimited shelf life so long as they are stored at room temperature. 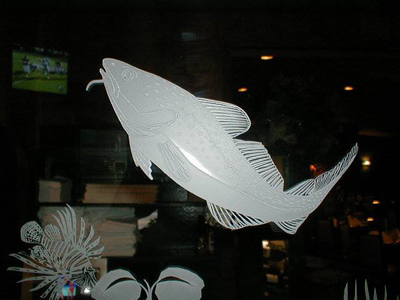 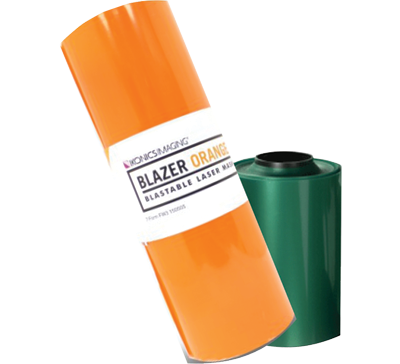 IKONICS Products
LaserTape: This is their 4 mil thick green film which is available in 4", 6", 10" and 12" widths on 100' rolls. This film costs approximately a penny per square inch. This product can be used on curved items, but the item should be blasted shortly after applying the film.

Blazer Orange Laser Mask: This film is also 4 mils thick and comes in 6", 12", 24" and 52" widths on 100' rolls. The cost is approximately 1.5¢ per square inch and, as the name suggests, is orange in color. This film is especially forgiving on objects that have a compound curve.

IKONICS provides guidelines as a starting point for laser settings, but remember that every laser will be different and you’ll likely need to fine tune these settings for your equipment. These settings guidelines were developed using a Trotec Speedy 300 which is a very fast laser, so don’t be surprised if you have to up the power or reduce the speed if you are using a slower laser.

Rayzist Product
LazerMask: This masking material is available in four widths, 4", 6", 8" and 10" on 200' rolls, and costs approximately 1.5¢ per square inch. The newest film is red in color (it was formerly black) and was changed to be translucent so it would be easier to properly position.

Using Laser Masks
All three films are easy to use and are flexible enough so they can easily be wrapped around cylindrical objects. Laser mask film is applied in the same way as other sandcarving films and vinyl lettering. Place the leading edge of the film flat against the substrate and, using a plastic squeegee, press the mask down by pushing the squeegee across the substrate. If done correctly, you will have no air bubbles. If you do have air bubbles, they should be removed prior to blasting for best results. Air bubbles can be worked out using a squeegee, but if that doesn’t work, use a pin to pop the bubbles. If the bubble isn’t removed by the lasered image, it will be necessary to cover it with tape before blasting. The film’s low tack adhesive allows you to reposition the mask as necessary. Once you become comfortable with using a squeegee, you should be able to apply a piece of film with ease and with no air bubbles which is ideal. 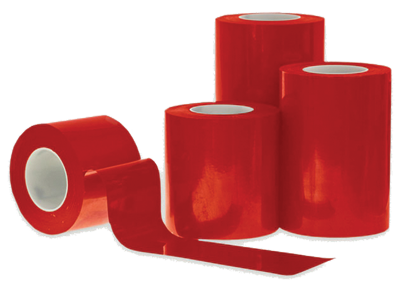 Once the mask is properly positioned, remove the clear carrier sheet. Before blasting, mask the areas on the substrate not covered by the mask to protect them from overspray.

Because these films are 4 mils thick, they will withstand some depth during sandcarving, certainly more than just surface etching. If desired, they are durable enough to allow you to create a deep etch, one that is even deep enough to paint fill. For the most part, the limitation will be when the centers of the “a, b, d, e, g, o, p, q” can’t withstand the pressure from the blaster and blow away. This is, to a great extent, determined by how well you burnish down the film before lasering.

Note, too, that these films also work as a protective masking material for laser engraving. Although this may seem redundant, I have found that when laser engraving on glass, the results are much better when one of these films is applied to the surface. I assume the film acts like a buffer and absorbs some of the heat. Whatever it does, it produces a cleaner, sharper image than engraving without the film. Of course, laser engraving still doesn’t match the quality of a sandcarved product and cannot produce anything more than a surface etching. 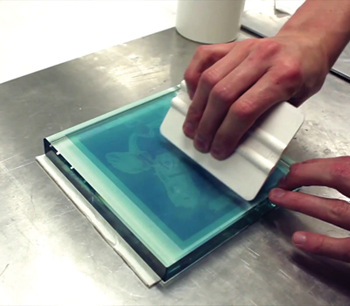 To apply laser mask film, place the leading edge flat against the substrate and, using a plastic squeegee, press the mask down by pushing the squeegee across the substrate. 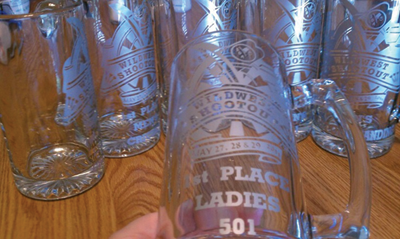 This glassware was etched and silver Rub-n-Buff was added to give more contrast to the product.

So, in short, if you have a laser, this method is simpler, faster and requires less initial investment.

Why bother with the sandcarving part at all? Why not just laser the item? Well, to some degree, it depends on what you are etching. If it is glass, you can laser it directly and bypass the entire sandcarving portion but that usually comes at a price. Lasered glassware looks pretty good when done well but most everyone agrees that it rarely compares to the quality of sandcarving. A sandcarved piece of glass almost always has sharper, cleaner edges, a more consistent etching and never any shards which are common with lasered glass.

As a result, the perceived value of the sandcarved product is much higher, especially when depth is added to the mix. Lasered glass can be surface etched but there is no way to give the laser-only method depth—that has to be done by blasting. It is often that little bit of depth that brings the higher perceived value to the piece.

When etching substrates other than ordinary glass, sandcarving can work wonders. Real crystal has a certain amount of lead in it and does not laser well, but you can still use your laser to create stencils for sandcarving crystal items. These films also work well with wood, marble, stone and even bricks although you will likely want to use an adhesive on any rough or uneven surfaced products. The light adhesive or tacky coating on these films aren’t aggressive enough to withstand that kind of abuse when being blasted. 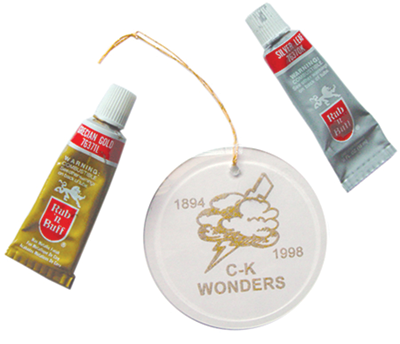 Adding Some Color
Color filling is also possible with the laser film. After blasting the item, it can be sprayed with an appropriate paint prior to removing the remaining mask. Just clean the blasted area to remove any dust that might be hanging on. You can even hand wash it to insure it is clean if you are careful not to damage the film. Just be sure to completely dry the item before applying paint. You can also apply paint with a brush. This is the typical way to color fill if you want to use multiple colors within the same design.

Another way to add color to glass before or after the film has been removed is by using Rub-n-Buff. Available online and at most hobby stores, this product is intended for wood, but it works very well with glass, marble and other slick surfaces where you can use things like mineral spirits, WD-40 or lacquer thinner to remove excess Rub-n-Buff. This product works best if applied prior to removing the film but it can also be used after, provided you can use chemicals or a single-edged razor blade to remove the excess pigment.

Although the instructions that come with the product tell you to let it dry before buffing, I don’t recommend that when you’re using it for glass, marble, etc. Rub-n-Buff is difficult to remove once dry. I suggest using as little as possible to begin with and then, after only a minute or two, remove any excess. Don’t be surprised if you have to apply the product more than once to get it as dense as you want it, but it is much easier to apply it twice than to let it harden and then remove excess. If the engraving is deep enough, you can remove the excess with a single-edged razor blade but more often than not, you will have to use a chemical as previously mentioned. 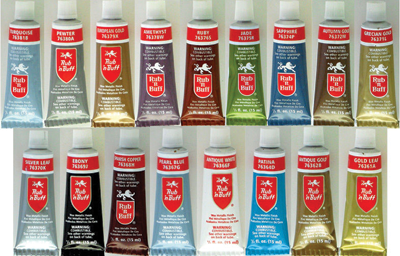 Rub-n-Buff is a wax product that will color etched glass.

Conclusion
I have been using laser masks since the day they came out. I even participated in the original testing for some of it. I find it does an excellent job, especially for glass. It allows me to get the quality of sandcarving without all the washout and exposure steps. This isn’t necessarily a big deal if I am etching a lot of something but when just doing a few, photoresists are very time consuming.

Sandcarved items are in high demand. People enjoy the rich, distinctive look sandcarving produces on glass, marble and wood, as well as a host of other materials. A laser engraver allows you to produce inexpensive, custom sandcarving stencils in-house. So, if you currently own a laser and are involved in sandcarving, you might want to consider producing your own laser mask sandcarving stencils.