Is laser engraving a growth area for industry businesses? What about rotary engraving, sublimation and digital printing? What equipment do you own and how often do you use it? How likely is it that you might purchase new equipment during the next year? What factors influence your equipment purchases? What products and market areas are hot right now?

In an effort to learn the answers to these types of questions, EJ recently conducted a survey among our readers. The survey response was fabulous and it enabled us to collect some great, meaningful data about the equipment being used in the Recognition and Personalization industry today. In fact, we gathered so much useful information that we decided to present it to you in a two-part series. Thanks to all of you who responded and congratulations to those of you who won a free one-year subscription for doing so! Here’s a look at the results. 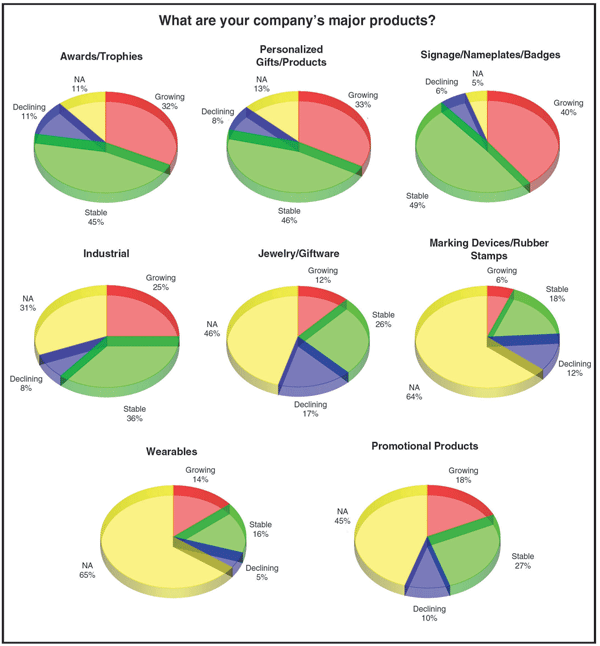 Who are you?
According to the results:

What are your major products?
(Figure 1)

Of the major product categories in the industry, we asked you to rate whether each area was a growing, stable, declining or non-applicable part of your business. It’s interesting to note that we posed this same question in a 2013 Reader Survey (July 2013) and the results of this survey are nearly identical. For example, this year in the awards/trophies category, 32% rated this area as growing and 45% rated it as stable. In 2013, 28% rated awards/trophies as growing while 46% said it was stable. The results in the other categories were nearly identical as well.

According to the results, most of the core areas of the industry, including awards/trophies, personalized gifts/products and signage/nameplates/badges were rated as growing or stable, suggesting that these types of products continue to have a strong foothold in the industry. Only 11% reported that awards are not part of their business and an even smaller number, 5%, indicated that they aren’t involved in signage/nameplates/badges.

Interestingly, although 31% said they aren’t involved in industrial engraving, the 61% who are say that this area of their business is growing or stable. This number is up slightly from 2013 when 52% indicated industrial products were growing or stable. The growth and stability in this area could be due to the fact that laser engraving machines make it easy to mark on many industrial parts. In the past year or so, we’ve also seen greater availability in new materials (durable aluminum), equipment (fiber lasers) and applications (barcodes, military applications). 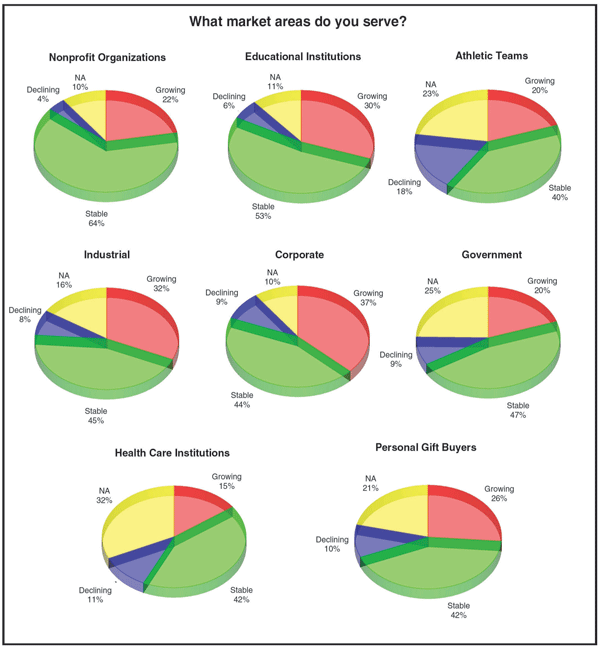 The majority of the readers who responded to this survey are not involved in the areas of marking devices/rubber stamps or wearables. Historically speaking, marking devices/rubber stamps have typically been sold by larger businesses that specialize in this type of product as opposed to being just one product line among many in a smaller business. And the same could likely be said for wearables—businesses that produce a lot of wearables very likely specialize in this area. This could account for the large percentage of respondents who don’t sell marking devices or wearables.

What market areas do you serve?
(Figure 2)

We also asked respondents to rate the market areas they sell to and of those which are growing, stable, declining or a non-applicable part of the reader’s business. Nearly every market area listed was overwhelmingly rated as growing or stable, suggesting that businesses in our industry are serving markets which offer good future potential.

Having a diverse group of customers is further illustrated by other growing areas that were noted, including contract work, dog clubs, funeral homes, weddings, firearm owners and resorts. Musicians, small business and wholesale were mentioned as stable market areas.

What are your company’s major services?
(Figure 3)

Next, we asked survey participants to rate the services they offer and whether those services are growing, stable, declining or a non-applicable part of their business. Here again, the results were nearly an exact duplicate of those gathered in our 2013 Reader Survey. 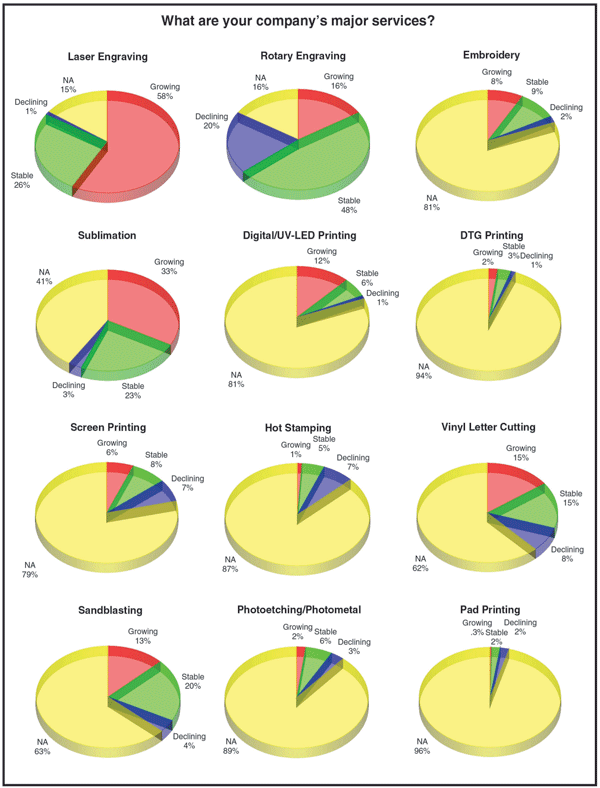 Not surprisingly, laser engraving came out on top with 58% claiming this is a growing part of their business—58% also claimed this was a growing part of their business in 2013. Laser engraving has been flourishing in this industry for many years now, and it is continuing that upward trend. The equipment is relatively affordable, it’s easy to use, the applications are many and we’re seeing more and more materials and products designed for laser engraving. Laser engraving also presents virtually limitless opportunities for being really creative, and many laser owners are taking advantage of this. Respondents say they laser engrave all kinds of things, including baseball gloves, water skis, duck calls and guitars, and there’s also the opportunity to make products such as ornaments, bookmarks, chess sets, models, toys, etc. Another reason for the continued growth is that most new businesses entering the industry appear to be purchasing laser engraving equipment to start out as opposed to other types of marking equipment.

Looking at the results from this survey in Figure 3, you can see that rotary engraving is still alive and it’s still a respectable part of the industry. Rotary engraving was rated as growing or stable by 64% of the respondents (compared to 54% in 2013) and only 16% said they don’t offer this service. This is likely due to the fact that many industry veterans use rotary engraving equipment in their businesses for certain types of work, whether it’s engraving batches of trophy plates or personalizing engravables, watches and other fine jewelry. In addition, rotary engraving is the preferred method—and sometimes the only practical method—for engraving certain types of jobs. On the other hand, the idea of plunging into rotary engraving can be daunting for novices, and some new people are simply not familiar with the technology.

What may be somewhat of a surprise is that 41% of the survey respondents indicate that they don’t offer sublimation in their business. However, if you combine the sums of the growing and stable responses, this outnumbers those who don’t offer the service at all which indicates that this is a stable area of the industry that is also experiencing notable growth. No doubt this is due to the “personalization boom” we are experiencing and the fact that you can sell just about anything imprinted with a personal message, photo or artwork. We are also seeing better technology in sublimation than ever before, making it an excellent method for personalizing all kinds of products.

The vast majority of you who responded to this survey do not offer direct print in your business. This is not too surprising because this is still a new technology that hasn’t completely established itself, particularly in our industry. One has to speculate, however, that this could be an up-and-coming technology and those numbers could very well change in the next few years.

Laser engraving, rotary engraving and sublimation are the clear forerunners in terms of the services that readers offer. The vast majority of participants indicated that they do not offer embroidery, DTG (direct-to-garment) printing, screen printing, hot stamping, sandblasting, photoetching/photometal or pad printing. While the majority of you indicate that you don’t offer vinyl letter cutting, 30% rated this a growing and stable part of their business which could indicate that this service is experiencing some growth in this industry. 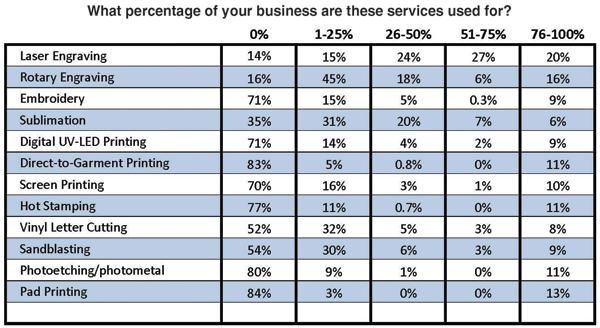 What percentage of your business are these services used for?
(Figure 4)

The next question asked readers to indicate the percentage of their business that each service is used for. As in the previous question, laser engraving, rotary engraving and sublimation came out on top. Somewhat surprising is the laser engraving category where the responses were pretty much equally spread out among 1%-25%, 26%-50%, 51%-75% and 76%-100% of the business that laser engraving is used for. Only 20% indicated that they use laser engraving for 75%-100% of their business. One would have expected that number to be higher, although it is the highest among all of the services in all of the categories. It does indicate that these businesses most likely offer other services as well. Another interesting result is that among those who do offer DTG printing, most (11%) use it for 76%-100% of their business. The same is true of photoetching/photometal and pad printing. This suggests that, although these are not extremely popular marking methods in our industry, those who do use them have tapped into the appropriate markets in their businesses. 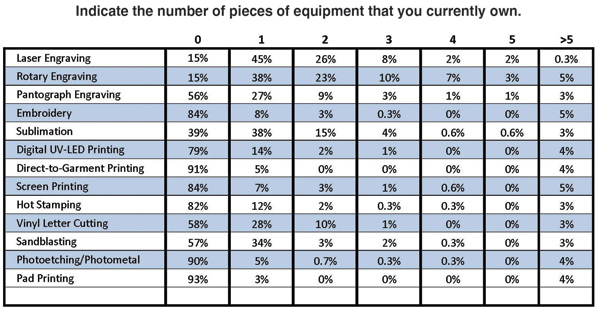 Indicate the number of pieces of equipment you currently own.
(Figure 5)

Of all the varieties of equipment that a typical business owns, the majority own only one piece of equipment of any given type. However, a relatively large number of respondents reported owning two laser engraving machines and two rotary engravers, and numbers between the two types of machines were fairly close. As shown in Figure 5, 45% of the respondents own one laser and 26% own two lasers, while 38% own one rotary engraver and 23% own two. In this year’s Laser Engraving Buyer’s Guide (in the August 2016 issue and online at www.engraversjournal.com), many of the manufacturers noted a trend among customers who are adding a second laser to expand their production, and this appears to support that. Very few respondents indicated owning more than two pieces of any given type of equipment which, again, could indicate that many businesses are diverse in terms of the services that they offer, e.g. they might have one laser, one rotary machine and one sublimation setup. 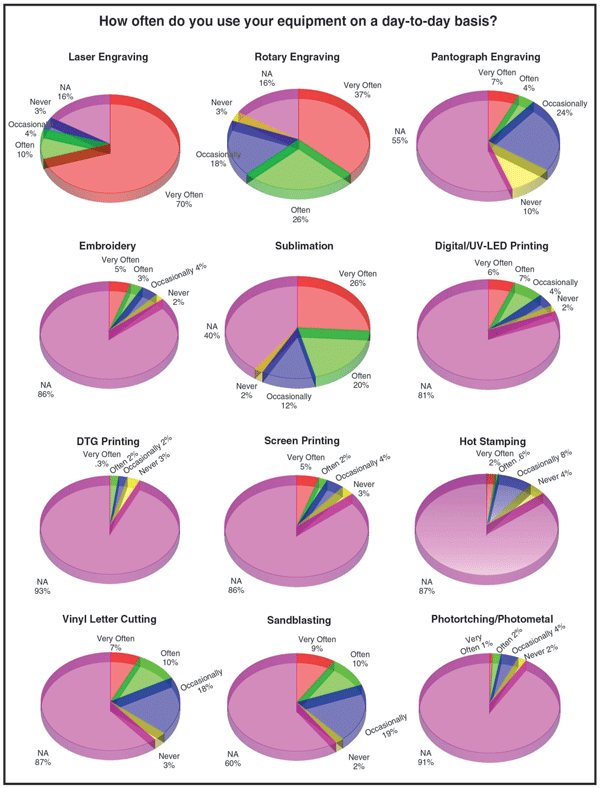 How often do you use your equipment on a day-to-day basis?
(Figure 6)

Not surprisingly, 70% of respondents use their laser engraving equipment very often and the majority of those who rotary engrave (37%) use their rotary equipment very often as well. And here is proof again that pantograph engraving machines haven’t completely gone the way of the dinosaur as 24% of the respondents occasionally use their pantographs. This isn’t completely surprising. Here at EJ, we sometimes hear from readers who are using their pantographs for special jobs, such as engraving a large silver bowl or pewter tankard. Pantograph engraving is sometimes a preferred method for engraving expensive and valuable items, such as an heirloom watch or locket.

Sublimation ranks up there as well, with 46% saying they use their equipment very often or often, indicating that those who do own the equipment use it a lot. The never use equipment category is very small, and in some cases non-existent, which suggests that if people own the equipment, they use it.

Conclusion
We hope you found these survey results to provide some interesting insight into what’s happening in the area of equipment and that, perhaps, you can put some of this information to work for you in your business. There are some clear trends revealed in these survey results. We believe this is the first time information like this has been gathered in our industry and look forward to doing more in the future.

Thanks again to all of you who responded and who truly made this information meaningful.

Be sure to watch for part 2 of the 2016 Equipment Survey results which will provide information about purchasing equipment, outsourcing work and more!