Leading the way in the
Recognition & Personalization Industry since 1975.

Published monthly, each issue of The Engravers Journal is packed with important and useful information on a broad range of topics, including awards, gifts, personalized products, identification products, rotary and laser engraving, digital printing, sublimation, sign making and much more.

In 1974, there were in excess of 100,000 engraving-related businesses in the world but there were no magazines, trade shows or trade associations catering to this soon-to-be-burgeoning industry. New Hermes representatives Mike Davis and Jim Farrell recognized the dire need for information, education and learning the fine points of the craft, and subsequently brainstormed the idea of a 16-page newsletter that would be circulated worldwide with a subscription charge to defray costs.

EJ is Launched
In January 1975, work begins putting together the first issue of The Engravers Journal and on June 6, the first bi-monthly issue is mailed. It was the world’s first publication centered around engraving, awards and personalization, and it was a success from the very first day.

The publication grew rapidly, prompting Mike and Jim to move the headquarters to larger facilities twice during the next few years. The industry grew by leaps and bounds as well, going from manually operated machines to computer-controlled equipment and then branching out to high tech laser engraving and computer digital processes, such as full-color sublimation and digital printing. All the while, the industry also saw a steady stream of innovations in materials, supplies and products. To help readers sort it all out, EJ launched a comprehensive product/supplier directory in 1987, another first in the industry, which today is published annually and is known as the Recognition & Personalization Directory™.

In 1994, EJ increased its frequency to 12 times per year. In 2000, Jim and his wife Rosemary, who had been with the company for some 25 years, retire. Sonja Davis, wife of Publisher Mike Davis, joins EJ as general manager. 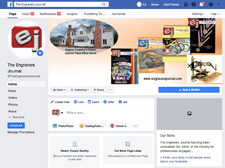 Going Digital
In keeping up with the digital world, EJ debuted its first website in 1997, its first digital edition in 2008, its first E-newsletter in 2010 and its Facebook Page in 2015.

And beyond...
The rest, as they say, is history! During the 40+ years since EJ’s founding, virtually every major innovation in the industry has made its debut in the pages of The Engravers Journal.

We look forward to serving the needs of our readers for another 40+ years as the Recognition & Personalization Industry continues to grow and prosper, and exciting new technologies and opportunities arise in the industry.

If you are looking for information to help run your business better, check out The Engravers Journal today!